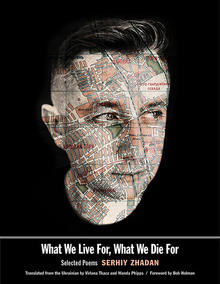 What We Live For, What We Die For: Selected Poems

“Everyone can find something, if they only look carefully,” reads one of the memorable lines from this first collection of poems in English by the world-renowned Ukrainian author Serhiy Zhadan. These robust and accessible narrative poems feature gutsy portraits of life on wartorn and poverty-ravaged streets, where children tally the number of local deaths, where mothers live with low expectations, and where romance lives like a remote memory. In the tradition of Tom Waits, Charles Bukowski, and William S. Burroughs, Zhadan creates a new poetics of loss, a daily crusade of testimonial, a final witness of abandoned lives in a claustrophobic universe where “every year there’s less and less air.” Yet despite the grimness of these portraits, Zhadan’s poems are familiar and enchanting, lit by the magic of everyday detail, leaving readers with a sense of hope, knowing that the will of a people “will never let it be / like it was before.”

Serhiy Zhadan was born in the Luhansk Region of Ukraine and educated in Kharkiv. His previous works include Mesopotamia, and his books have been translated into several languages. Virlana Tkacz and Wanda Phipps are an award-winning translation team who have been translating Ukrainian poetry since 1989.