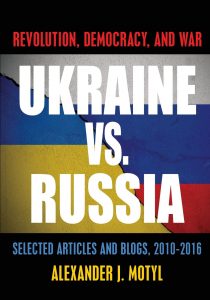 Ukraine vs. Russia offers indispensable background knowledge and analysis on one of the most important issues of the day—Vladimir Putin’s war against democratic Ukraine. Alexander J. Motyl’s articles and blogs offer in-depth analysis as well as a running commentary on current events and historical controversies in both Russia and Ukraine—from the rise of Ukrainian dictator Viktor Yanukovych to the impending fall of Russian dictator Putin. Motyl discusses politics, society, culture, economics, history, language, and memory and shows how they relate to the Russo-Ukrainian War and to Western understanding—and misunderstanding—of Ukraine and Russia. As Washington considers a policy shift toward Russia and Ukraine, Western policymakers and analysts would be well-advised to consult this important volume.

Alexander J. Motyl is professor of political science at Rutgers University-Newark. A specialist on Ukraine, Russia, and the USSR, and on nationalism, revolutions, empires, and theory, he is the author of Imperial Ends: The Decay, Collapse, and Revival of Empires; Revolutions, Nations, Empires: Conceptual Limits and Theoretical Possibilities; Dilemmas of Independence: Ukraine after Totalitarianism; Sovietology, Rationality, Nationality: Coming to Grips with Nationalism in the USSR; Will the Non Russians Rebel? State, Ethnicity, and Stability in the USSR; The Turn to the Right: The Ideological Origins and Development of Ukrainian Nationalism, 1919 1929, the editor of The Encyclopedia of Nationalism, and the co-editor of The Holodomor Reader: A Sourcebook on the Famine of 1932-1933 in Ukraine (with Bohdan Klid) and The Great West Ukrainian Prison Massacre of 1941: A Sourcebook (with Ksenya Kiebuzinski).