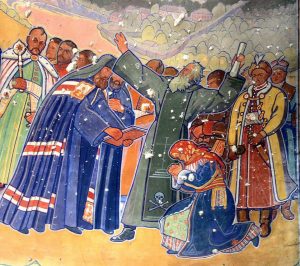 The Shevchenko Scientific Society invites all to a lecture “«When There is Blasphemy against God from All Ends and Parts of Christendom»: On the Significance of Scriptural Echoes in the Epistles of Ivan Vyshens´kyi” by Dr. Harvey Goldblatt, Professor of Medieval Slavic Literature at Yale University. Professor Goldblatt is the author of numerous publications on the literary patrimony of the medieval and premodern Orthodox Slavic religious and cultural community, the language controversies among the Slavs, aspects of the Cyrillo-Methodian heritage and, most recently, the significance of the “Slovo o polku Ihorevi.” His collection of essays on the sixteenth-century Ukrainian monk and ardent polemicist Ivan Vyshens´kyi will be published in Ukrainian by “Krytyka” in Kyiv in 2018, and his translations of Vyshens´kyi’s writings into English will appear as part of the Harvard Library of Early Ukrainian Literature. Professor Goldblatt is a long-time collaborator of the Ukrainian Research Institute at Harvard. The lecture will take place at the society’s building, 63 Fourth Avenue (between 9th and 10th Streets.) at 5 p.m. For additional information, call (212) 254-5130.