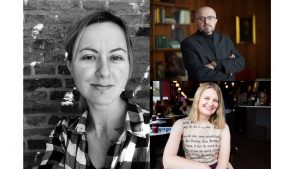 A reading of Ukrainian poetry by IRYNA SHUVALOVA and VASYL MAKHNO with English translations by OLENA JENNINGS. Translations include works in progress from a collection of Shuvalova’s work to be released by Lost Horse Press in 2019.