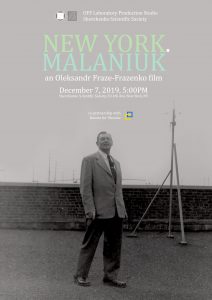 Film premiere of “” (2019), directed by Oleksandr Fraze-Frazenko. The film reconstructs the New York period (after WWII) of the distinguished Ukrainian emigre poet Ievhen Malaniuk (1897-1968) – how he lived, how he wrote and how he loved. Opening remarks by Vasyl Makhno and Oleksandr Fraze-Frazenko. The film includes comments on this key figure in Ukrainian literature of the 20th Century, by: Bohdan Boychuk, Bohdan Rubchak, Yuri Tarnawsky, George Grabowicz, Vasyl Makhno, Yuri Andrukhovych, Tamara Skrypka, and Anna Procyk. Based on Ukrainian archives in New York and New Jersey, the film also presents unique readings by the author on radio”Svoboda.”