The presentation will explore the transnational activism of young Ukrainian immigrants in the United States during and after the Euromaidan protests and their contribution to democratization of Ukraine from abroad. While the existing research details the influence of the Ukrainian diaspora on the democratic development of Ukraine, especially since the proclamation of its independence (Koinova, 2009; Satzewich, 2002), it rarely discusses whether and how young Ukrainians who emigrated to the United States in the last two decades have contributed to the democratization of their homeland from abroad. Drawing on the transnational activism literature (Faist, 2010; Levitt & Jaworsky, 2007; Smith & Guarnizo, 1998), this presentation will highlight motivations of young Ukrainian immigrants to engage and support the Euromaidan movement from abroad; the diversity of strategies they employed to enable political, economic, and social change during and after the Euromaidan; and the subsequent impact they created in Ukraine and the United States. The presentation will draw on a qualitative case study that examined the non-profit organization Razom, which was established by a group of young Ukrainians in New York City in the wake of Euromaidan in December 2013 to support democracy, human rights, and social justice in Ukraine.

Alla Korzh is Assistant Professor of International Education at the School for International Training (SIT) Graduate Institute. She holds a doctorate in international educational development from Teachers College, Columbia University. Her research intersects at the issues of education access, quality, and equity for disadvantaged children, youth, and adults; education for social justice and social change; transnational youth, social movements, and informal citizenship education; and educational transformations in post-Soviet contexts. She recently co-edited the book “Reimagining Utopias: Theory and Method for Educational Research in Post-Socialist Contexts.”

Serhiy Kovalchuk is a research associate and a lecturer at the . He holds a doctoral degree in curriculum studies and teacher development with a specialization in comparative, international and development education from the Ontario Institute for Studies in Education. His research interests include democratic citizenship education, youth activism, and education research in non-Western contexts. He has recently co-edited a scholarly volume “Reimagining Utopias: Theory and Method for Educational Research in Post-Socialist Contexts.” 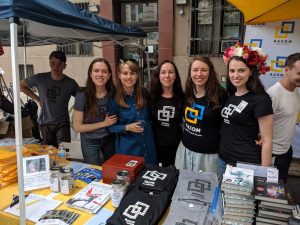