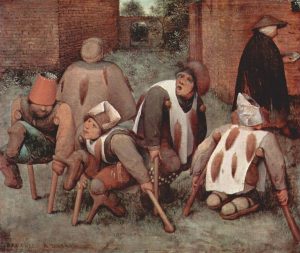 The history of beggars is poorly covered by written sources; they are usually represented only in the documents of repressive institutions. Beggars’ communities were divided into two categories: recognized and not recognized by municipal authorities. The first group was controlled and taxed while the second one was evicted from towns. Although both groups were “othered” by burghers, the legalized beggars were an integral part of urban society because accepting alms, they gave a chance for salvation to those who helped them. The attitude towards beggars evolved. The first change occurred in the 14th century when, according to Jacques Le Goff, the Middle Ages became “the world of homebodies” and the spirit of the Crusades declined. The next stage in the evolution of the attitudes towards beggars occurred in the 16th century when the Protestant ethic began to spread. The Sejm constitutions of the Kingdom of Poland, like the government regulations in other countries of the late Middle Ages, regulated society’s attitude towards beggars, tried to protect the towns from their negative impact and imposed taxes on them. But the result was not significant.