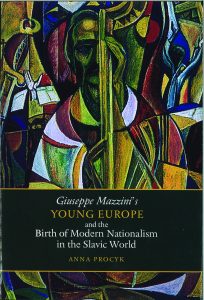 The Shevchenko Scientific Society, the Ukrainian Institute of America and the Ukrainian Academy of Arts and Sciences co-sponsored the presentation by Anna Procyk of her book Giuseppe Mazzini’s Young Europe and the Birth of Modern Nationalism in the Slavic World (University of Toronto Press, 2019).

The work examines the intellectual currents in Eastern Europe that attracted educated youth after the Polish Revolution of 1830. Focusing on the political ideas brought to the Slavic world from the West by Polish émigré conspirators, Anna Procyk explores the core message that the Polish revolutionaries carried, a message based on the democratic principles espoused by Young Europe’s founder, Giuseppe Mazzini.  The documentary sources used in this study testify that at its inception the political nationalism in Eastern Europe was republican-democratic in nature and that the clandestine groups in Eastern Europe were closely cooperating with one another through underground channels.  It was through this cooperation that the better-educated Poles and Ukrainians in the political underground became aware that the interests of their nations, bound together by the forces of history and political necessity, were best served when they worked closely together.