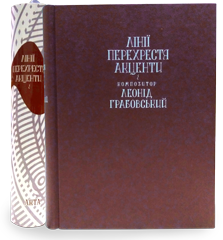 From 1954 to 1959, Ukrainian composer Leonid Hrabovsky (b. 1935) studied composition under the supervision of Boris Lyatoshynsky and Lev Revutsky at the Kyiv Conservatory. His master’s thesis “Four Ukrainian Songs for Chorus and Orchestra” (1959) won the first prize in an All-Union competition. Shostakovich wrote: “the ‘Ukrainian Songs’ by Hrabovsky pleased me immensely—his arrangements attracted me by the freedom of treatment and good choral writing’.” In the early 1960s Hrabovsky taught theory and composition at the Kyiv Conservatory. He belonged to a group of Kyiv avant-garde, along with Hodzyatsky, Huba, Silvestrov, Stankovych and Zahortsev. Hrabovsky was one of the first Soviet composers to adopt minimalism as a music genre. His works include dramatic, orchestral, chamber, and vocal music. In 1990 he moved to the United States at the invitation of Ukrainian Music Society.