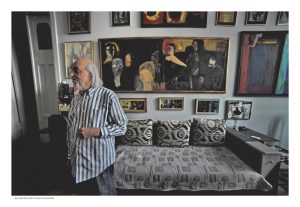 Bohdan Boychuk, a well-known Ukrainian poet, co-founder and member of the New York Group of Poets. He was active member of the Ukrainian émigré cultural community, he was cofounder and coeditor of the New York Group’s serial publication Novi poeziï and the main organizer of the group’s publishing house. He was also an editor of literature(between 1961 and 1973) of the journal Suchasnist’, and a cofounder and coeditor of the literary journal Svito-vyd in Kyiv (1990–99). Boychuk’s published modernist poetry, strongly influenced by the philosophy of Existentialism, includes Chas boliu (The Time of Pain, 1957), the long poem Zemlia bula pustoshnia (The Earth Was a Wasteland, 1959), Spomyny liubovy (Memories of Love, 1963), Virshi dlia Mekhiko (Poems for Mexico, 1964), Mandrivka til (The Journey of Bodies, 1967), Podorozh z uchytelem (Travels with the Teacher, 1976), Virshi, vybrani i peredostanni (Poems, Selected and Next to the Last, 1983), Tretia osin’ (Third Autumn, 1991), and Kyivs’ki ekslibrysy (Kyiv Ex-Librises, 2006). A two volume edition of his selected poetry was published in Kyiv in 2007. His prose works include Dvi zhinky Al’berta (Albert’s Two Women, 2002), Try romany (Three Novels, 2004), Nad sakral’nym ozerom (At the Sacred Lake, 2006), and Moï feministky (My Feminists, 2011). He is also the author of Dvi dramy (Two Dramas, 1968) and a memoir Spomyny v biohrafiï (Memoirs within a Biography, 2003).