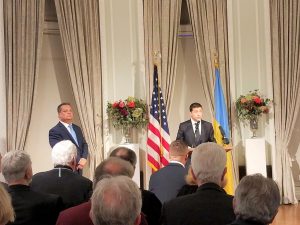 On September 23, 2019, at the start of his official visit to the United States, President of Ukraine Volodymyr Zelensky met with the diaspora at the Ukrainian Institute of America. Organized by the Ukrainian Congress Committee of Ukraine (UCCU), the event was attended by a few dozen representatives of various civic, professional, and religious organizations, including the Shevchenko Scientific Society in the United States, Ukrainian American Veterans, Ukrainian Catholic Church, Ukrainian Orthodox Church of the USA, Mejlis of the Crimean Tatar People, Ukrainian Engineers Society of America, Plast Ukrainian Scouting Organization USA, Ukrainian Youth Association, and many others. UCCU President Andriy Futey made opening remarks, urging the newly elected president to safeguard Ukraine’s sovereignty and promote Ukrainian culture and language.

“You are our best diplomats, you are in fact our lobbyists,” said President Zelensky. “You defend our sovereignty, our territorial integrity here, in the United States, and throughout the world. We are very thankful to you.”

Over the course of a short Q&A session, the audience raised a wide range of issues, including US-Ukraine bilateral relations, conflict in eastern Ukraine, annexation of Crimea, and the Holodomor. President Zelensky emphasized that he would use diplomacy to accelerate the resolution of the armed conflict in eastern Ukraine and the return of Crimea. In particular, he expressed hope that US President Donald Trump would display unequivocal support for Ukraine’s sovereignty and territorial integrity. President Zelensky stated that he would like to achieve greater transparency in President Trump’s policy towards Ukraine.

Addressing the audience full of third and fourth generation Americans, President Zelensky mentioned that there were plans under way to grant Ukrainian citizenship to Americans of Ukrainian descent. These remarks came on the heels of President Zelensky’s inaugural address, urging Ukrainians abroad to come back. “We are waiting for you. There is no need to bring souvenirs from abroad, but please, bring your knowledge, experience and values.”

The event concluded with a quick round of selfies with the president and his departure in anticipation of a meeting with President Trump this week. President Zelensky participated in the opening of the high-level General Debate at the 74th session of the United Nations General Assembly.