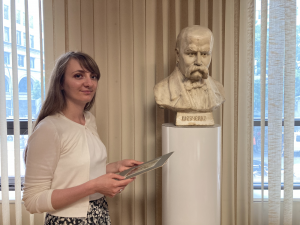 doctoral student at the Faculty of Culture and Arts of the Ludwig Maximilian University in Munich, I am preparing a comparative study on post-war Ukrainian diasporan art in Germany and North America, based on examples of the works of three artists – Sviatoslav Hordynsky (1906-1993), Edward Kozak (EKO) (1902-1992) and Petro Mehyk (1899-1992) – at selected stages of their emigration.

In my dissertation I analyze the identities of the selected artists and their cross-border networks and contact zones in Europe and America from a perspective of current migration research. Furthermore, I highlight the role and importance of various Ukrainian diasporan cultural and artistic circles in the formation of a Ukrainian cultural identity and the creation of the concept of “Ukrainian national art”.

Hordynskyj, Kozak and Mehyk belonged to the younger generation of Ukrainian artists, whose works represented new forms of expression in Ukrainian art emerging during the Lviv period in the 1930s. They focused on developing the Ukrainian national tradition from a new perspective and introduced new theoretical concepts into Ukrainian art. At the same time, the question of modernizing Ukrainian art while preserving the national aspect and the traditions of Ukrainian folk art was central in the artistic discussion.

Hordynsky was a painter of sacred art, an art critic, translator, poet, and writer. Kozak (EKO) was chairman of the Ukrainian Association of Fine Artists in Munich, as well as a cartoonist, writer, editor and publisher of the Ukrainian satirical magazines “Cross-eyed” (Zyz), “The Mosquito” (Komar) and “Mykyta, the Fox” (Lys Mykyta). Like Hordynsky, he created numerous paintings dedicated to Hutsuls and the Ukrainian peasants, and worked in the field of church iconography. Mehyk created mostly still lifes and portraits. He was also the initiator, founder, and leader of the Ukrainian art group “Peace” (Spokij) in Warsaw, the Ukrainian Art Studio in Philadelphia, and was editor-in-chief of the magazine “Ukrainian Art Digest”, one of the most important art publications in the Ukrainian diaspora.

The paths of the three artists intersected in Lviv, Munich, Philadelphia, Detroit, and New York. They worked in the cultural and artistic centers of Europe, the United States and Canada, and were among the most prominent and leading artists of the Ukrainian diaspora. Through their exhibition and publishing activities, Hordynsky, Kozak, and Mehyk tried to develop the concept of a “new Ukrainian art” and to represent it in the Western world at a high level.

As a scholarship recipient of the German Academic Exchange Service (DAAD), I conducted research in the United States in the archival and art collections of the Shevchenko Scientific Society, the Ukrainian Museum in New York, the Ukrainian Museum and Library of Stamford, the Ukrainian National Museum of Chicago, the Ukrainian American Archives of Detroit, and the Library of the Ukrainian Academy of Arts and Sciences in the U.S.A.  In addition, I was kindly granted access to the private collections of Larissa and Tamara Hordynsky, Olena Yurchuk, Orest Dutka, Christine Zelinsky, Chrystyna and Edward Theodore Kozak, Martha and Orest Kebalo, Bohdanna Tytla, Nadia Nynka, Natalia Sonevytsky, and Oksana Wanchycka.

In the following discussion I would like to briefly focus on the archives of Edward Kozak (EKO) preserved in the archival collection of the Shevchenko Scientific Society in New York.  It is one of the richest collections of the oeuvres of EKO, containing also various newspapers, art magazines, and exhibition catalogues.

The archive also includes Kozak’s correspondence with various scholars, cultural, artistic, political, and public figures. Of particular interest are letters from the journalist Ivan Durbak, the historian and ethnographer Volodymyr Kubiyovych, from the bandura artist and singer Volodymyr Lutsiv, from the football player Volodymyr Kobzyar, the engineer Myroslav Koltunyuk, the physicist Oleksa Bilaniuk, from the linguist Boryslav Bilash, the lawyer Volodymyr Komarynsky, from the political theorists and activists Dmytro Doncov, Mykola Lebid, Vasyl Mudry, Roman Smal-Stotsky, from the philosopher Ivan Mirchuk, and from the Patriarch of the Ukrainian Greek-Catholic Church Cardinal Josyf Slipyj.

Another section of the archive of Edward Kozak at the Shevchenko Scientific Society includes reproductions of EKO’s postcards dedicated to the First World War, the Ukrainian soldiers and peasants. Here we also find a series of black-and-white and colored photographs of the artist’s work, as well as his personal photos.

In the archive of Edward Kozak we also find manuscripts of the Ukrainian Association of Fine Artists in Munich, chaired by EKO. Included here are letters from numerous Ukrainian artists, programs and reports of the Association. This material is crucially important for the understanding and the reception of Ukrainian exhibition activities and art life in the Displaced Persons camps in West Germany in the period 1947-1949.

The archive of Edward Kozak at the Shevchenko Scientific Society also contains reports and statements of the Ukrainian Literary and Art Club of Detroit, of which EKO was a member. These materials reflect the artistic and cultural life of the Ukrainian diaspora in local centers in America, and highlight the goals of Ukrainian art organizations at different phases of emigration.

Included in the archive of Edward Kozak are also several reviews of the artist’s exhibitions, as well as the exhibitions of his sons, which appeared both in American publications as well as in newspapers and magazines of the Ukrainian diaspora. Of particular interest here are the reviews of the art exhibitions held in Hunter, New York, often referred to as “the Ukrainian Carpathians”, and one of the most popular places for informal gatherings of Ukrainian diasporan artists.

The archive of Edward Kozak at the Shevchenko Scientific Society highlights the connections and the networks which Ukrainian artists formed and maintained in their diasporan surroundings. Moreover, the archive illuminates the role of the Ukrainian artists in creating a vision of Ukrainian art in Europe and North America.

I would like to express my sincere gratitude to the Shevchenko Scientific Society, to the Librarian Lev Chaban, and especially to the Administrator Vasyl Makhno for their help and for giving me the opportunity to discover new horizons for my research. A heartfelt “thank you” also to Professor Olena Nikolayenko, Chair, Department of Political Science, Fordham University, for extending the invitation to contribute to the English-language newsletter of the Shevchenko Scientific Society in the United States.

By Veronika Skip, a doctoral student, the Ludwig Maximilian University in Munich