On September 16, 2020 during the opening ceremony of the 27th Lviv International BookForum, Vasyl Makhno, Shevchenko Scientific Society’s Program Director, was named the first winner of the “Encounter: The Ukrainian-Jewish Literary Prize” ™ for his novel Eternal Calendar.

Founded in 2020, “Encounter: The Ukrainian-Jewish Literary Prize” ™ is awarded annually to the most influential work in literature and nonfiction (in alternate years) that fosters Ukrainian-Jewish understanding, helping solidify Ukraine’s place as a multi-ethnic society and giving truth to the motto, “Our stories are incomplete without each other.” The Ukrainian Jewish Encounter (UJE), a Canadian charitable non-profit organization, and Ukraine’s NGO “Publishers Forum” (Lviv, Ukraine) are co-sponsors of the award. Read more. Read in Ukrainian. 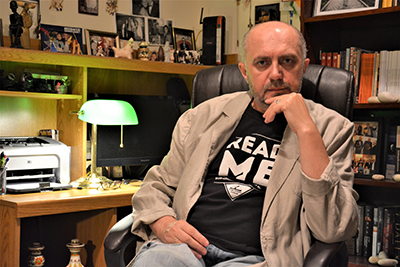 Makhno is a Ukrainian poet, essayist and translator, member of the Ukrainian PEN, who has lived in New York for two decades. His poems and essays have been translated into 25 languages. He is the winner of several awards, including the Lesiya and Petro Kovalevykh Fund (2009), the International Morava Poetry Prize (2013) and BBC Book of the Year (2015, Ukraine). In preparation for the novel Eternal Calendar, he participated in the Agnon Literary Residence in Buchach, Ukraine.