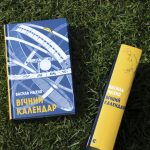 In an interview after the publication of this novel, Vasyl Makhno said that he had wanted to write an epic work about small places and to depict the particular “dirt of life.” The events in this massive novel stretch from the 17th century to the present day. The text comprises three parts. The first is “Salamander Earth,” whose main events unfold around Ottoman Sultan Mehmed IV’s military campaign to Podilia in 1672. The main plot line concerns the Polish-Ottoman war of 1672–1699 in Galicia, a borderland that initially belonged to the Polish-Lithuanian Commonwealth, later the Ottoman Empire, and eventually Austro-Hungary. The work begins with a description of proclaimed Jewish messiah Sabbatai Zevi’s journey by sea to Istanbul. In 1666 humanity was awaiting the coming of the Messiah and the end of the world. Myriad stories spread in both the Christian and Jewish communities about this figure and the world stood still in anticipation. The novel’s narrative is concentrated in such a way that it intertwines events of both local and global history. One of these localities is Mytnytsia, where over many years the main participants in events are the members of two families—the Ukrainian Barevyches and the Polish Wolańskis. In the Galician village of Mytnytsia, along with the towns of Yazlivets, Chortkiv, and Buchach, Ukrainians live alongside Jews and Armenians, and subsequently Ottomans who arrived in these territories as conquerors. From 1672 on, Yazlivets became the northernmost outreach of the Ottoman Empire. Part 1 includes characters invented and historical: in addition to the Barevyches and the Wolańskis, the Grand Vizier Köprülü, Polish kings Michał Wiśnowiecki and Jan Sobieski, the Armenian merchant Minas Syrynowicz, and others are all present. 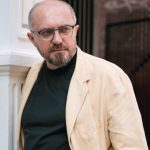 In Part II, “Field Kitchen,” whose plot ties it to the previous section, the novel’s action jumps forward to 1916 during the second year of World War One when the General Staff of the Russian Army carried out a military operation that went down in history as the Brusilov Offensive. Military hostilities pass through Mytnytsia and Yazlivets. In addition to the Russian and Austro-Hungarian armies, two Turkish divisions also take part. The war destroys the ordinary lives of the Barevyches and Wolański-Korytowskis, members of whose families experience various difficulties in conjunction with the war. Although 1916 marks a major, temporal frontier in this story, the author retains a nonlinear narrative that begins in the 1870s and ends in 1919 when Galicia becomes part of Poland after Ukrainians lose the Polish-Ukrainian War. In each part of the novel, individual chapters are dedicated to the local Jews, something that is particularly notable in the second, which features Chortkiv’s tzadik dynasty, with the town becoming a center of European Hasidism thanks to the Friedmans.

Part III, “Train,” is dedicated to events that take place after World War Two. The Mekhamets, a family that is forcibly resettled in Mytnytsia in 1945 from near Leżajsk, join the cast of main characters. A great post-war exchange of peoples takes place according to the terms of the Yalta Conference. An entire village embarks by freight train on a week-long trip to Mytnytsia under guard by Soviet soldiers. The journey is full of a variety of everyday problems and psychological trauma. The arrival of the IDPs to this new place in March 1945 is the most difficult challenge of their lives. After this territory was liberated by the Soviet army, there is a resurgence of resistance among Ukrainian nationalists to the establishment of the Soviet government. The descendants of the Barevyches and Wolańskis will take part in these complicated historical events, as will some of the IDPs, the Mekhamets in particular. The life of the village in the 1970s and 1980s is shown as a process of decline: great history transforms into ordinary, everyday life. Near the end of the novel, a descendant of the Mekhamets and Barevyches who has lived in New York since the 1990s returns once more to the place of his ancestors to stand on the walls of the ruined Yazlivets fortress and absorb the languorous feeling of the earth and sky, memory and oblivion.

In one scene from the novel, two Turkish mules, delighted with the Russian soldiers, are talking in their stall on Christmas night about war. One of the them says, “We live from memory past to memory future.” Vasyl Makhno’s novel is a singular reconstruction of the memory hidden in fortress stones, the fertile black earth of Galicia, in reality and mythology.