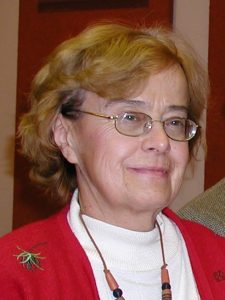 With great sadness, we announce that on December 21, 2022, Svitlana Maria Andrushkiw (née Lutzky), beloved wife, mother, and grandmother, passed into eternal rest, at home, surrounded by her loving family. She was 79 years old.

Born in 1943 in Stanislaviv, Ukraine, to Eugene and Oksana (née Lemecha) Lutzky, Svitlana and her family immigrated to the United States in 1950.  They arrived and settled in New York City, NY, where she would spend nearly half of her life.

After completing her Master’s degree in Library Science at Pratt Institute, Svitlana worked as a librarian in the Slavic division of NY Public Library in NYC. She later became the head librarian and director of archives for the Shevchenko Scientific Society in NYC and continued there vigorously for 26 years until retirement.

Svitlana was engaged in the national movement Rukh (Newark Branch), trying to help build a better future for Ukraine. She participated in the Ukrainian National Women’s League of America and was a lifetime member of the Ukrainian Scouting Organization Plast and the Plast sorority “Ti Scho Hrebliy Rvut”. She was a long-time parishioner of St. John the Baptist Ukrainian Catholic Church in Newark, NJ and actively participated in many organizations and functions there.

She is survived by her loving husband of 47 years, Roman; her brothers, Marko Lutzky of New York, NY, and Dan Lutzky of Bulverde, TX; son, Pavlo and his wife, Marika, and four grandchildren, Aleksandra, Natalia, Christian and Adrian. She was predeceased by her parents, Eugene and Oksana Lutzky.

In lieu of flowers, Svitlana would have wanted to support the continued fight for Ukraine, as well as humanitarian relief to the Ukrainian population affected by the war. Donations may be made to: