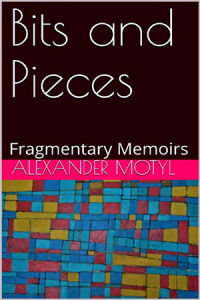 Alexander Motyl, professor of political science at Rutgers University and laureate of the 2019 Omelian and Tetiana Antonovych Foundation Award, has recently published the book, Bits and Pieces: Fragmentary Memoirs. A specialist on Ukraine, Russia, and the USSR, and on nationalism, revolutions, empires, and theory, he is the author of many books, including Revolutions, Nations, Empires: Conceptual Limits and Theoretical Possibilities; Dilemmas of Independence: Ukraine after Totalitarianism; Sovietology, Rationality, Nationality: Coming to Grips with Nationalism in the USSR; Will the Non Russians Rebel? State, Ethnicity, and Stability in the USSR; the editor of The Encyclopedia of Nationalism, and the co-editor of The Holodomor Reader: A Sourcebook on the Famine of 1932-1933 in Ukraine (with Bohdan Klid) and The Great West Ukrainian Prison Massacre of 1941: A Sourcebook (with Ksenya Kiebuzinski).

What is main theme of the new book?

I’ve never wanted to write a memoir, and, as Bits and Pieces demonstrates, I haven’t. These “fragmentary memoirs” consist of a handful or two of semi-biographical essays and interviews, interlaced with my drawings, poems, and paintings, and with a novella (which may have more to say about me than the non-fiction pieces) thrown in for good measure. Some things are discussed in great detail; others are passed over in silence: readers will have to decide which. All memoirs are selective remembrances full of inconsistencies, lacunae, and contradictions; this one is no different.

And yet, notwithstanding the fragmentation and lack of narrative structure, the texts do hang together (as well they should: after all, they are mine), producing a set of coherent reflections on a variety of topics of interest to me and, I trust, to others. Although Bits and Pieces makes no pretense of being definitive about anything—and especially about my life—I wish to emphasize that it is not intended or should be construed as, or is, a post-modernist text. Sometimes, a collection is just a collection, no more and no less. And just because a collection of texts may have no overarching grand meaning does not mean that it celebrates the indeterminacy of meaning.

What motivated you to write a collection of semi-biographical essays?

Several essays had been written earlier; only one was written specifically for this collection. The interviews had also appeared at various times in the past.

It occurred to me, a few months ago, that, put together, these texts actually approximated a memoir. And so, I decided to smooth the rough edges and try to make these texts into a coherent whole.

How did you decide upon the inclusion of certain life episodes in the book?

Of the four more or less autobiographical essays, two (My No Man’s Land and My Fall River Obsession) were commissioned for other publications, one (about the Andy Warhol Superstar, Ultra Violet) was the product of a friend’s prodding, and only one, My Cafes, was written specifically for this book. These four essays are concerned less with particular episodes from my life and more with personal and family developments, feelings, views, activities, and beliefs. As a result, I am not narrating the story of my life, but presenting a variety of impressions that, collectively, may give the reader some sense of what I have done with my life. Hence the title, “Bits and Pieces,” because the book really is a collection of bits and pieces, including essays, interviews, drawings, paintings, poems, and a novella–all of which presumably say something about “who I am.”

How might the book help readers get through the turbulent times of the pandemic?

Although I mention the pandemic in the preface, the rest of the book is fairly lighthearted in tone. The book also contains poetry, drawings, photographs, and a mass of my paintings. The book may or may not have any words of wisdom to impart, but it should certainly serve as a distraction from the ongoing crisis. I also hope that some of it will elicit a smile, a laugh, or at least a giggle.