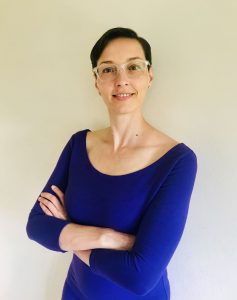 Current Position: Helena Rubinstein University Endowed Fellow in the Humanities and Assistant Professor of Slavic and Global Studies at the Pennsylvania State University

Although I joined the Shevchenko Scientific Society only recently, I have been benefiting from networking and collaborating with its members for decades. In the coming years, as I establish my career at Penn State, I look forward to contributing to the Society’s mission in the ways that will go beyond my scholarship. I am especially inspired by the Society’s dedication to supporting junior scholars and will welcome opportunities to share my professional expertise with the new generation of scholars and scientists.

I greatly appreciate a series of new opportunities that the Society has recently introduced for junior scholars and scientists and value its robust support for research and scholarship through a variety of fellowships and publication grants. I myself benefited from this support in 2019, when I received a subvention from the Society that helped me finance the publication of my first monograph, Bridging East and West: Ol’ha Kobylians’ka, Ukraine’s Pioneering Modernist (Toronto University Press, 2019). I am also grateful for all the events and scholarly panels that the Society sponsors at the annual gatherings of the Association for Slavic, East European, and Eurasian Studies (ASEEES) and am enjoying learning about the work of scholars from fields unrelated to mine through the ongoing online lecture series.

Born and raised in Ukraine, I studied German Philology at the T.H. Shevchenko Kyiv National University (1996-2001). Upon receiving my M.A., I moved to the United States for non-academic reasons, but within a few years I missed being a student and enrolled in a doctoral program in Comparative Literature at the University of California, San Diego. Since at the time I was not planning on a career in academia, I was at liberty to disregard questions of potential “marketability” of my research and to pursue a project that was in tune with my interests in 19th-century European intellectual history and my resolve to engage in Ukraine-centered scholarship. A study of Ol’ha Kobylians’ka and her literary oeuvre was a perfect fit, and I am grateful to my academic advisers—one of them, Amelia Glaser, is the Society’s member too—for supporting me at every step during my dissertation writing process. I am also grateful to them for convincing me to explore career opportunities in academia. I feel fortunate and tremendously privileged to study and teach Ukraine at a powerful research institution in the U.S. I could never see it coming back in 1996 but cannot imagine a better fitting career now.

My new book project, tentatively titled The Reel Story of Russia’s War against Ukraine, examines the legacy of Soviet and Hollywood war films, as well as the influence of contemporary media practices in (mis)representing war, terror, and terrorism, in cinematic depictions of Russia’s ongoing war against Ukraine. By analyzing portrayals of the Euromaidan Revolution, Russia’s annexation of Crimea, the Donbas War, and Russia’s 2022 full-scale invasion of Ukraine in recent Ukrainian films, I shed light on the myths and ideological touchstones that contemporary Ukrainian filmmakers inherited from their 20th-century predecessors and elaborate on how the canonical narratives and images from the past have been transformed and adjusted to the new historical circumstances.

In my study, I pay close attention to how post-Soviet, postcolonial, and post-truth aspects of war-torn Ukraine conflate in the works of contemporary Ukrainian filmmakers to offer fresh perspectives on issues of memory and national identity. I am also interested in how contemporary filmmakers address the subject of control and circulation of information for political ends and how they frame cinema and other forms of media as pivotal strategic territories, where some of the key battles of contemporary wars are taking place, affecting the ways in which these wars are perceived and what actions are taken by those directly involved in them.

Although the primary object of my investigation is Ukraine-centric, its implications promise to reach beyond the field of Ukrainian studies and as widely as the topics of the films it analyzes—from heterarchical identities and new modes of political mobilizations to weaponization of history, instrumentalization of culture, and digital warfare. Some of my preliminary findings have appeared or are about to appear in East/West: Journal of Ukrainian Studies and East European Jewish Affairs. Recently, I also coedited a special “Focus on Ukraine” section in the 77th issue of KinoKultura (July 2022)—a project directly related to my current research—which features several high profile interviews and almost forty reviews of recent Ukrainian films. As to hobbies, I enjoy surfing and am a professional sand sculptor. Together with my teammates, my fellow Sand Squirrels, I won several U.S. open competitions and am regularly invited to participate in various art expos across the country and beyond.

Do not underestimate the importance of mind-body connection and work-life balance. Research and academia take a lot of stamina, and it is paramount to take breaks and recharge. The best advice I received as a graduate student was to get plenty of sleep, eat well—something that your grandma would approve—exercise, and spend time with people who lift you up.