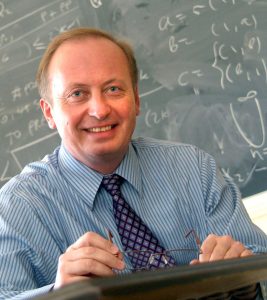 Dr. Grigorchuk was the recipient of the 2019 Humboldt Research Award by Germany’s Alexander von Humboldt Foundation, in recognition of his lifetime research on group theory and discrete mathematics.

As   I  am a member  of the  Ukrainian  branch  of  the Shevchenko Scientific Society, I found it  natural  to  join NTShA  after my  move  to the  USA. I  am proud to  be a member of  NTShA  and try to serve  the  Society  in the best possible  way. When  I became  a  member, I  convinced several  colleagues at TAMU to  join  the Society.  Among  them  were Volodymyr  Nekrashevych, Sergiy  Butenko,  Mariya  Vorobets, and Yaroslav  Vorobets.

In fact, the  first  US Ambassador  to  Ukraine  Roman Popadiuk (1992-1993) influenced my decision  to  become  a  member.  When  I  moved  to  the United States in  2002,  accepting  the position  of Full Professor at Texas  A&M  University (by  the  way,  the  President  of  the University  at that  time  was  Robert  Gates, former director of the Central Intelligence Agency), I  was  glad to hear  that  Amb. Roman Popadiuk was the Executive Director of the George H. W. Bush Presidential Library Foundation at TAMU.  At  that  time,  the  Ukrainian  Diaspora at  TAMU  was  quite  big  and  full of initiative,  and  Amb. Popadiuk took an active part in the Ukrainian events in our town.

When I  came up with  the  idea  to  start a  new competition “The best young  mathematician  in Ukraine”  with  the  goal  to  support  young  talented  mathematicians and  stimulate  academic research in Ukraine, Amb. Popadiuk suggested a way to find sponsors.  With the  active  support  of  Roman  Andrushkiw,  chair  of  the  Mathematics  and  Science section  of  NTShA,   NTShA  and the U.S.-Ukraine Foundation agreed to sponsor the competition.  Now we regularly hold the competition. Among the competition’s winners is Olena  Karlova who currently works in the Department of Mathematical Analysis at the Yuriy Fedkovych Chernivtsi National University. She  is  not  only  excellent   mathematician  but  also  a superb administrator of math summer camps for students in the Carpathian  mountains. Chernivtsi  is  my favorite  city  in Ukraine, since I  finished high school there, and my  parents whom I visit every year continue to live there.

The  Society  does  important  work in  support of  Ukrainian culture  and  science,  making  it more accessible for  the general  public  in the USA,  including  Ukrainian  diaspora. The Society afforded me an opportunity to get in touch with Professor Wolodymyr V. Petryshyn, a highly regarded professor of mathematics at Rutgers University. I  also had a chance  to  meet  Vasyl Lopukh,  the  Administrative Director of NTShA  who,  in my opinion,  is doing  excellent  work  for the Society.  We  realized  that  we  are  “zeml`iaky”:  he  is  from  a small   picturesque town  of Zalishchyky  in Ternopil  oblast,  where   I  lived  from the  age  of 2  to 6. My  father Ivan F. Hrygorchuk  worked as a teacher  of  mathematics and  physics in a local  school,  and  my  mother  Kateryna Murmylyuk  was  a  doctor in hospital. Vasyl  Lopukh  and I discussed the  idea  of creating a  photo album, documenting the  history of the  school, its teachers and alumni.

I am a mathematician, and mathematics is international in its scope.  But  I  was  born  in Vyshnivets (Ternopil  oblast),  a  famous town  not only  in Ukrainian,  but also in European  history,  and  I was raised  by  my  parents  in the spirit of Ukrainian  traditions. Though I lived only the first 17  years of my  life in  Ukraine, I keep  in me the  Ukrainian spirit as  much as I can.  I  think  in the Ukrainian  language, I love Ukrainian  culture and history,  and I am proud  to  be Ukrainian. I  cannot  claim that  this helped  me  in my  career  path. But it sustains me emotionally and ethically so it has some bearing on my research too.

What is your current research project?

It is almost impossible to explain to non-mathematicians what kind of research the mathematician is doing.  In general, my research covers topics in algebra, dynamical systems, probability, geometry, topology, and computer science.

Specifically, I deal with  such  topics as  “How  can a group  grow?”, spectral  theory  of groups  and  graphs, and in particular the question “Can  one  hear  the  shape  of  a  group?”   (which is a  mimic  of  the  famous  question  raised by Mark Kac “Can one  hear  the  shape  of a  drum?”),  applications  of  groups to fractals,  chaos  and  renormalization,  theory of  finite  automata  and ergodic  theory.  Among  groups invented  by  me  is a  famous  group  of  intermediate  growth  that  bears  my  name,  the  Basilica group,  the  Hanoi  Tower  group. My  studies  gave a better understanding  of  the phenomenon  known  as  Banach-Tarski  Paradox:  the  unit  ball  can  be  split  in finitely  many pieces uses  which  one  can assemble a two  identical  disjoint  copies (without holes  inside) of the original  ball.  This  is  related  to  the  work of  John von Neumann.  My  students,  colleagues, followers and I did  and  continue  to  do  a  lot  of research  around  these  and  other  fascinating  topics.

Be  active  members, propose  new  ideas  and  try  to  implement  them,  do not forget  to pay  the membership  fee.