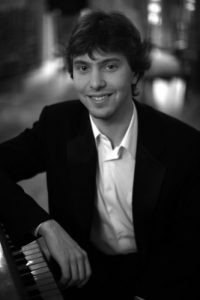 What do you value about membership in the Society? What is your most memorable Society’s event or publication?

I have attended many wonderful events, meetings and lectures at the Shevchenko Scientific Society. I’ve met incredibly talented and inspiring people. Also, I was privileged to participate in some of those events as a speaker and a musician. The most memorable for me, perhaps, were the concert “Ukraine, Shevchenko and Music” at the Merkin Hall and a meeting with a great composer Valentyn Silvestrov.

For past several years I have been researching, studying and performing piano works by Ukrainian composers. Many of these works are very rarely or never played and remain unknown to the general audience. My CD of piano works by a forgotten Ukrainian composer Serge Bortkiewicz has been released on the Piano Classics label and received enthusiastic reviews in Europe and in the United States. This year I performed Bortkiewicz’s Third Piano Concerto “Per aspera ad astra” with the National Symphony Orchestra of Ukraine. In 2016 at New York’s Symphony Space I presented a program “Revealed: Lost, Suppressed and Forgotten Masterpieces” that consisted exclusively of Ukrainian piano music.

What is your current research/work project (or your hobbies)?

I continue studying and promoting Ukrainian classical music. I have finished recording a new CD that includes a major work by another forgotten Ukrainian composer Theodore Akimenko. While editing this recording, I have already started working on the next program of fascinating works by Ukrainian composers that I am planning to record in 2019. I am also preparing for the recitals and concerts with orchestras in the United States and Europe (including Kyiv, Lviv and Odesa).

There are so many great personalities in Ukrainian culture and history who have been forgotten. In every field: literature, art, music, philosophy. They deserve to be widely known; and the world deserves to know about them. And I think there hasn’t been a better time than now to fully introduce Ukraine to the world. But I found out through my own experience (and I guess it is not news for anyone) that in order to make others interested, you have got to be completely crazy about your topic. So be crazy: it is worth it.