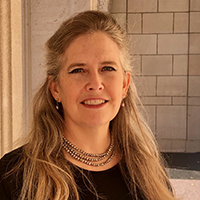 Current Position: Professor of Anthropology, the University of Washington, Seattle

The activities of the Shevchenko Scientific Society were frequently discussed in my home when I was growing up, as both of my parents were members. I joined the Society because it brings together people who share my interests in scholarship and the future of Ukraine.

I value the society’s support for scholars through fellowships and the funding of publications, and the opportunity to learn about the work of Ukrainian and Ukraine-focused scholars in various fields.

As a cultural and linguistic anthropologist who focuses her research on Ukraine, Ukrainian culture and society are my career path. I grew up speaking Ukrainian at home, and later learned several other languages, including Russian. When I graduated from college in 1990, the USSR was crumbling, which opened up the previously closed Soviet area to Western anthropologists. This allowed me to conduct fieldwork in Ukraine and to make it the focus of my doctoral research. Language politics played a key role in Ukraine’s independence movement, and knowing both Ukrainian and Russian meant that I was well equipped to conduct research on the language situation, which was the focus of my first book, titled Contested Tongues: Language Politics and Cultural Correction in Ukraine (Cornell University Press, 2005). My interests have followed language politics into popular culture, tracing the explosion of previously restricted global cultural products and styles and how they are creatively combined with the revival of folk traditions.

I am currently working on my second book, focused on the politics of popular culture in Ukraine, based on interviews, participant observation, and analysis of online media. In this book I shed light on the role of popular culture in the promotion of Ukrainian language and identity since independence. I consider the issue from various perspectives, presenting research on a youth-oriented activist organization, the life stories of pop and rock music performers (both overtly patriotic and more ambiguously carnivalesque), the social and political life of the Ukrainian national anthem, and Eurovision as an international stage for Ukrainian identity building.

Pursue your passion, then you will always love your work. If you have enthusiasm for the big things, then you will have stamina to deal with the inevitable mundane issues that are part of any job.