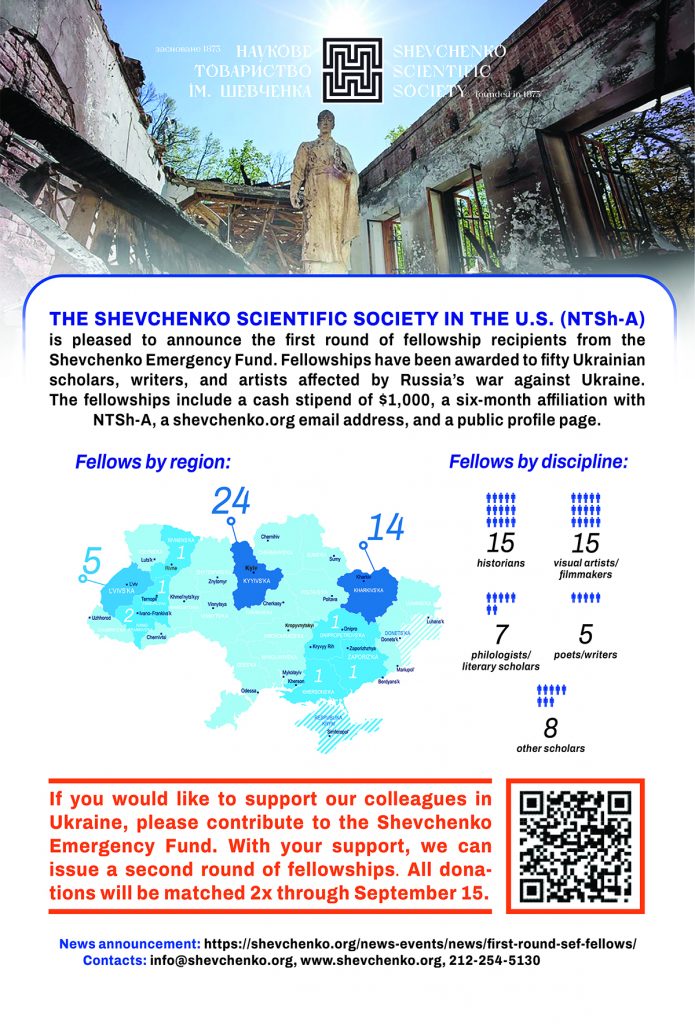 The Shevchenko Scientific Society in the U.S. (NTSh-A) is pleased to announce the first round of fellowship recipients from the Shevchenko Emergency Fund. Fellowships have been awarded to fifty Ukrainian scholars, writers, and artists affected by Russia’s war against Ukraine. The fellowships include a cash stipend of $1,000, a six-month affiliation with NTSh-A, a shevchenko.org email address, and a public profile page. Fellows are encouraged to participate in the intellectual life of the Society virtually through its events, roundtables, lectures, conferences, and publications, and by interacting with its members in the U.S.

The fellows, in alphabetical order, are:

The recipients live in all parts of Ukraine: Kyiv, Kharkiv, Poltava, Galicia, and Volhynia, among others. Several have found shelter in villages near the cities in which they normally live. At least 12 are internally displaced persons (IDPs), having fled bombing or the ever-shifting front line. Fellows are also diverse by age, from those in the earliest stages of their professional careers to eminent senior scholars. The largest groups by discipline include historians, philologists/literary scholars, visual artists/filmmakers, and poets.

The Shevchenko Scientific Society recognizes the importance of scholarship and culture to Ukraine’s war effort as well as for its post-war future. If you would like to support our colleagues in Ukraine, please contribute to the Shevchenko Emergency Fund. With your support, we can issue a second round of fellowships to recognize even more of our deserving colleagues.

Donate with a credit card