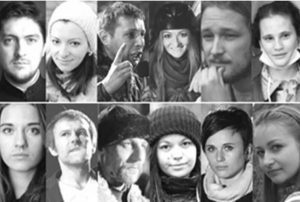 This month marks the fifth anniversary since the end of the anti-government protests in Kyiv and the ouster of the incumbent president from power. Many members of the Shevchenko Scientific Society in the United States analyzed the causes and the consequences of what has become known as the EuroMaidan or the Revolution of Dignity.

In an interview with Mykhailo Minakov, George  Grabowicz, Dmytro Chyzhevs’kyj Professor of Ukrainian Literature, Harvard University, noted that “the Ukraine that emerged from the Maidan and the resultant Russian response—the annexation of Crimea in 2014 and the ongoing war in the Donbas—is arguably fundamentally different from both Soviet Ukraine of 1922-1991 and the first stage of post-Independence Ukraine (1991-2013).”

Oleh Kotsyuba, the Manager of Publications at the Ukrainian Research Institute, Harvard University and Chief Online Editor of Krytyka, pointed out the continuous relevance of Taras Shevchenko’s work. “As a symbol of uncompromising struggle for human rights and equality who suffered for his beliefs, Shevchenko has been widely appropriated by the popular culture in the course of last year’s ‘Revolution of Dignity,'” wrote Kotsyba in the 2015 article in Krytyka.

Timothy Snyder, Richard C. Levin Professor of History, Yale University, criticized “the haze of propaganda” that surrounded the coverage of the Ukrainian revolution in Western and Russian mass media. Timothy Snyder and Tatiana Zhurzhenko,  Visiting Professor of Comparative Politics at the University of Vienna, published a compilation of diaries and memoirs of the Maidan. An extensive list of Dr. Snyder’s publications on modern Ukraine is available here.

Among other publications on the topic are:

Taras Hunczak, “Maidan and Its Aftermath,” in My Memoirs: Life’s Journey Through WWII and Various Historical Events of the 21st Century (Lanham, MD: Rowman & Littlefield, 2016), 211-228

Tamara Martsenyuk, “Sexuality and Revolution in Post‐Soviet Ukraine: LGBT Rights and the Euromaidan Protests of 2013–2014,” Journal of Soviet and Post-Soviet Politics and Society 2 (2016), 49-74

Olga   Onuch and Tamara Martsenyuk, “Mothers and Daughters of the Maidan: Gender, Repertoires of Violence, and the Division of Labour in Ukrainian Protests,” Social, Health, and Communication Studies Journal 1 (2014), 80-101

Catherine Wanner, “The Political Valence of Dignity and the Maidan Protests,” Euxeinos: Culture and Governance in the Black Sea Region 24 (2017), 3-9.