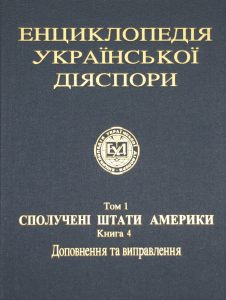 The Shevchenko Scientific Society has published the fourth—and final—book of the American volume of the Encyclopedia of the Ukrainian Diaspora (editor Orest Popovych and co-editor Alexander Lushnycky). The fourth book supplements three previous books, which took three decades to produce, providing additions, clarifications and corrections, as is customary for an encyclopedic project.

The content of the fourth book consists of 117 new entries by 34 authors, a section on the centers and branches of Ukrainian organizations in America, and a register of cities and towns with Ukrainian communities.

The editors were assisted by an Editorial Board and a Working Group of 19 members based at the Shevchenko Society branch in Philadelphia, whose members collected material as well as prepared and copyedited entries. Additional work was done by the Shevchenko Society branch in Detroit, as well as editors in Chicago and at the main Society office in New York.

In this book, readers will find hitherto undescribed phenomena, such as Virko Baley’s article “Music of Contemporary Ukrainian Composers in America,” or detailed information about the centers and branches of Ukrainian-American organizations compiled by Alexander Lushnycky. In short, the long-standing work of several generations has come to an end and the ambitious project Encyclopedia of the Ukrainian Diaspora is itself now a part of history.