The Biomedical Section of the Shevchenko Scientific Society in the United States established the Dobzhansky Genetics Club and held its inaugural meeting on November 2, 2019. The main goal of the newly formed club is to stimulate an academic discussion of cutting-edge research in genetics and foster a dialogue among Ukrainian American scientists of different generations. 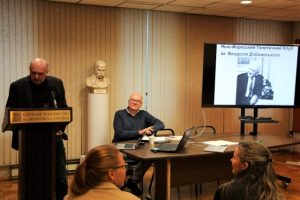 The Genetics Club is named after Theodosius Dobzhansky, a renowned Ukrainian American experimental and theoretical geneticist who played a prominent role in shaping a current perspective on the theory of evolution. Born in Nemyriv, a small town 240 kilometers southeast of Kyiv, in 1900, Dobzhansky lived through the World War I and the 1917 Revolutions before moving to New York on a fellowship from the International Education Board (Rockefeller Foundation) in 1927. His book, Genetics and the Origin of Species (1937), was the first in a series of influential works, advancing the notion of “modern synthesis” and reconciling the findings of Gregor Mendel’s theory of inheritance with Charles Darwin’s theory of evolution by natural selection.

The Genetics Club will hold semi-annual meetings in the fall and in the spring of each year. Each meeting will consist of a few 15-20 minute presentations of genetics research on pressing issues in our society.

Dr. Roman Shirokov, chair of the Biomedical Section, co-founder of the Genetics Club, and Associate Professor in the Department of Pharmacology, Physiology and Neuroscience at Rutgers University, made the introductory remarks and delivered a talk, titled “Paradise of Theodosius Dobzhansky” at the inaugural meeting. In his address, Shirokov underscored Dobzhansky’s scientific achievements through lifelong experiments with fruit flies and his deep concern about potential misuse of genetics research. Later, Shirokov discussed his own research on the genealogy of proteins.

The first meeting of the club also featured research by two junior scholars from Rockefeller University, leading biomedical research university located in New York City. Dr. Olya Yarychkivska, Postdoctoral Associate at the Shaham Laboratory, spoke about the death of cells and cancer, highlighting mechanisms of cell death and possibilities of cellular reprogramming. In her presentation, titled “Ants, Genetics, and Social Behavior,”  Iryna Ivasyk, Biomedical Fellow at the Kronauer Laboratory, discussed her research in the field of social evolution. Following the presentations, there was a lively discussion of the genetics of cancer, behavior, and molecular biology.