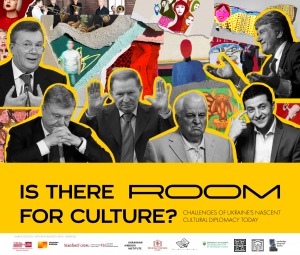 All the speakers concurred that the establishment of recent state institutions in Ukraine marks a historic turn in the country’s cultural diplomacy. “There is a new generation of institutions that are now imagined in Ukraine. They are looking for contemporary ways to present Ukrainian culture internationally,” said Volodymyr Sheiko, director of the Ukrainian Institute.

Founded in 2017, the Ukrainian Institute, a state institution affiliated with the Ministry of Foreign Affairs of Ukraine, seeks to promote “contemporary interpretations of the cultural heritage of Ukraine and project voices of multiple identities.” The Institute has recently launched the Lysiak-Rudnytsky Ukrainian Studies Program to advance Ukrainian Studies overseas.

The aim of the Ukrainian Book Institute (UBI) is to open the world to Ukraine and Ukraine to the world with the help of books. To that end, the UBI set up the Translate Ukraine Grant Program to support the translation and publication of Ukrainian-language books in foreign languages. As noted by UBI spokesperson Iryna Baturevych, “Ukraine should not only argue against the Russian fake news, but also create topics for discussion.”

This virtual event, featuring a mix of speakers from North America, Western Europe, and Ukraine, was a step towards overcoming Soviet-era legacies of distrust between Ukrainian state institutions and diaspora organizations in North America.

“I am thrilled and happy, like all of us in the Ukrainian Studies and the Ukrainian cultural diplomacy community, to see that in the aftermath of the Revolution of Dignity we have a significant structural change in the way Ukrainian state institutions operate, and there are new institutions whom we could not have imagined just a few years ago,” said Vitaly Chernetsky, learned secretary of the Shevchenko Scientific Society in the United States.

Meanwhile, there are many areas for improvement in Ukraine’s implementation of cultural diplomacy. Specifically, Marina Pesenti, director of the Ukrainian Institute in London, UK-based nongovernmental organization, called for “a better coordination between the Ukrainian Institute efforts and the Ukrainian diplomatic network abroad.” Another area for improvement mentioned by panelists is the development of Ukrainian book distribution networks to sell Ukrainian-language books overseas. Furthermore, panelists stressed the idea that it is important for Ukrainian scholars to participate in international conferences and for foreign scholars to attend scholarly events in Ukraine.

According to Olenka Pevny, director of Cambridge Ukrainian Studies, “one of the ways to have a sustained dialogue is to involve young students and academics.”

By Olena Nikolayenko, chair of the communications committee

Vitaly Chernetsky (Shevchenko Scientific Society in the US)