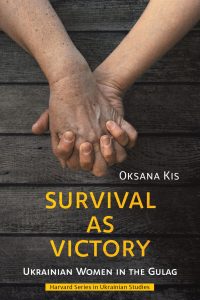 In March 2021, the Ukrainian Research Institute at Harvard University (HURI) and the Ukrainian National Women’s League of America (UNWLA) co-sponsored a discussion of Oksana Kis’s recent book, Survival as Victory: Ukrainian Women in the Gulag. Originally published in the Ukrainian language as Українки Гулагу: Вижити значить перемогти (Lviv: Institute of Ethnology, 2017), the book was elegantly translated into English by Lidia Wolanskyj and richly illustrated with photographs of Ukrainian women’s handiwork. Survival as Victory was published as a part of Harvard Series in Ukrainian Studies.

Based on the written memoirs, autobiographies, and oral histories of over 150 survivors, Oksana Kis provided an in-depth account of daily life in the Soviet forced labor camps as experienced by Ukrainian women prisoners.

The book makes a significant contribution to the extant literature by uncovering experiences of Ukrainian women prisoners and making their stories accessible to a wide audience. Martha Kichorowska Kebalo, member of UNWLA and the Shevchenko Scientific Society in the United States, and Lynne Viola, Professor of History at the University of Toronto and the author of The Unknown Gulag: The Lost World of Stalin’s Special Settlements (New York: Oxford University Press, 2007), commented on the book’s contributions to Ukrainian historiography.