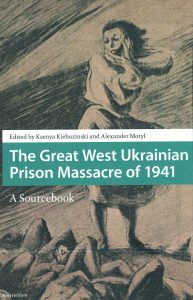 Dr. Motyl will present the book “The Great West Ukrainian Prison Massacre of 1941.A Sourcebook.” (Amsterdam University Press. 2016), edited by Alexander J. Motyl and Ksenia Kiebuzynski. The Great West Ukrainian Prison Massacre оf 1941 is important for several reasons. First, although it is one of the greatest atrocities committed, by the Soviet state, the Massacre is largely unknown. Second, the Massacre is critical to an understanding of state-sponsored mass killings in the twentieth century and to hu­man rights violations more generally. Third, the Massacre is central to making sense of Ukrainian and Polish attitudes toward World War II, Germany, the Soviet Union, and Jews. How nationally conscious Ukrainians and Poles responded to World War II and the Holocaust cannot be understood without an appreciation of the magnitude of the trauma of the Massacre of 1941.