Of Interest to our Members: Conference – The Independence War in Ukraine: Global Implications 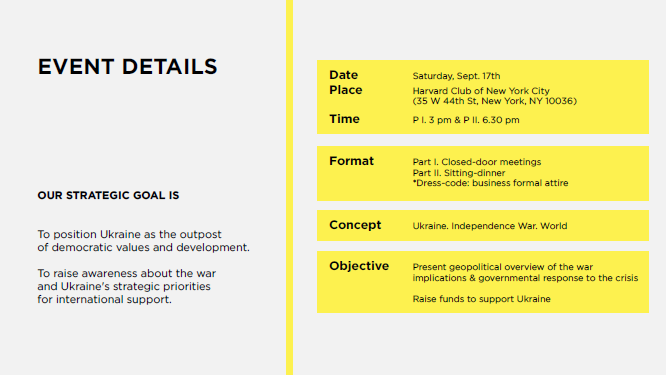 For details and registration go to: https://kse.ua/ua/events/?eid=9357  (please be patient, link is slow to load)

stract and too difficult to understand from afar. We offer a unique event that will bring together the greatest minds in the world and Ukrainians who have experienced the war, lead through it, and demonstrated bravery and resilience. We will aim convey the true intensity, political reality, and positive and negative emotions of the war on Ukraine. We will also discuss the global political and economic implications of the war and outline possible future scenarios.

The conference will have four panels: global security, economy, energy security, and food security. The speakers and the audience are top Ukrainian and international officials, academics, business people, and policymakers.

The charity dinner followed by a charity auction will celebrate the resilience and the spirit of the Ukrainian people. It will feature Ukrainians who will share their stories of overcoming the challenges of the war, resisting the Russian invasion, and maintaining and developing a democracy during a war.

For more information and registration go to: https://kse.ua/ua/events/?eid=9357

The conference and charity dinner are co-organized by the Kyiv School of Economics (the top Ukrainian university, economic think tank, and educational charity), Razom for Ukraine (the leading US-Ukrainian charity), and United24 (the fundraising platform initiated by the President of Ukraine). Since the beginning of the Russian invasion, these organizations have raised and deployed more than $200M in support of Ukraine. U.S. – Ukraine Business Council is an informational partner of the event.