The lexicography of color is considerably burdened by a lack of consensus on the meaning of many color names. Even the most popular hues and shades often have different definitions in standard dictionaries, sometimes even in two editions of then same dictionary. Furthermore, American and British usage is not uniform. A similar absence of uniformity in description of colors is also evident in Ukrainian sources. Although the Color Names Dictionary (1955, 1976), the basic source in this field was much used in current work, only a narrow selection was made from its 7500 descriptions of colors. The bulk of the entries in the present work are color names found in representative modern dictionaries, three American and one British. In addition to names of colors, the dictionary includes names used for descriptions of multicolored and parti-colored objects, such as colorations of animal coats. 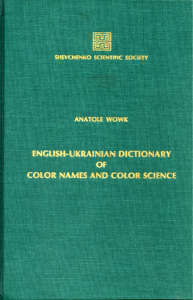