Oksana Asher’s dedicaton to the memory of her late father, the Ukrainian poet and scholar, Mychajlo Draj-Chmara, who perished during the purges of the 1930’s in the Soviet Union, deserves commendation. As a politically repressed person’s Draj-Chmara’s works have been for years forbidden to be published in the Soviet Union. For decades his name was hardly ever mentioned in the literary histories appearing in Ukraine. Some eight articles and one short book, in English, have been already published by Oksana Asher during ten years or so – all dealing with her farther and his works. The submitted manuscript is the largest among her essays. It is also the first one in French. She wishes to acquaint also the French readers with her father’s work and fate. Since Draj-Chmara’s art was influenced by French Symbolists, and his interests laid, to an extent, in translations and adaptations of their poetry, it stands to reason that the proposed manuscript is published in French. 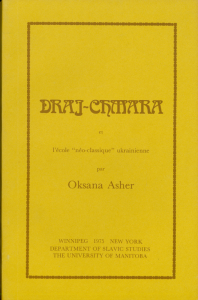